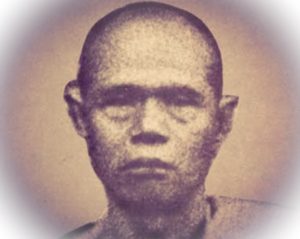 Luang Por Chaeng, Silapanya was born on a Friday on the 18th December 2428 BE

He was ordained in 2440 at the age of 12 as a Samanera Novice Monk, and remained ordained until the age of 20, when he was then ordained up one level to the status of a fully fledged adult Bhikkhu Monk. 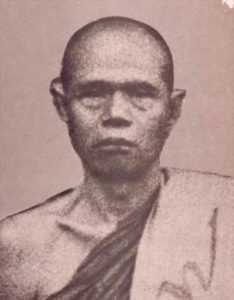 Luang Por Chaeng was a Pra Gaeji Ajarn Master Monk of the second World Wartime, of great importance in Thai History. He was highly reputed Master of Vipassana Kammathana practice, whose Mastery was heard of far and wide.

His powerful psychic abilities to empower amulets was highly reputed within the Sangha on a National Level, and he was always an invited member of the greatest and most important ‘Putta Pisek’ (Buddha Abhiseka) blessing ceremonies in History, including the Great HIstorical Ceremony of empowerment of Magical Protective Yantra cloths and ‘Suea Yant’ Yantra shirts for the Thai Military.

In the times of the second world and Indo-China wars, there were a few great Monks who stood out above all others for their Kong Grapan Chadtri, Klaew Klaad and Maha Ud Magic, whom the Thai Buddhist Folk of all Provinces knew and revered, no matter how remote the village. These great wartime Era Monks of great Magical Power were of course, Luang Por Jong, of Wat Na Tang Nork in Ayuttaya, Luang Por Jad of Wat Bang Grabao Luang Por and the great Luang Por Chaeng, of Wat Bang Pang, Luang Por Juan, and Luang Por Opasi

The famous Pha Yant Prajiad were given to some soldiers to test with three point blank range shots, all of which failed. these Yantra cloths of Luang Por Chaeng, and the Yantra Shirts of Luang Por jad (Wat Bang Grabao) were worn into battle, and became the famous story of the French Military seeing Thai soldiers shot with bullets, who were knocked to the ground by the bullets, and immediately stood up again and went back into battle as if nothing had hit them. The French Military then called the Thai Military ‘Taharn Phi’ (Ghost Soldiers). 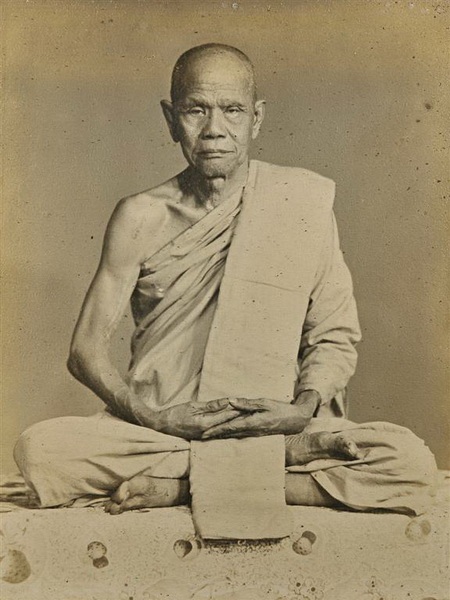 As Luang Por Chaeng was alive and abbot of Wat Bang Pang, he would receive many devotees each day with numerous requests, none of whom he would refuse. Some would come for Blessings, some for Amulets, and others to heal their Illnesses, and some devotees who had heard of his Magical Prowess, came to beseech the secrets of his Wicha, to become Sorcerors themselves, and help those in their hometowns.

Luang Por Chaeng would bless, distribute amulets, and heal his devotees without exception. As to those devotees who beseeched apprenticeship to learn to cast spells with Kata Akom Incantations, Luang Por Chaeng would always first make the Looksit learn to develop their meditative skill, and to allow them to develop moral fibre and the five precepts. Only then, when they had risen above the base temptations, would he allow them the secrets of the Incantations, their sequences and methods. He would teach his students how to cure ailments and banish curses, and expunge ghosts and spirits from possessed souls.

Luang Por Chaeng had a great respect for Luang Por Parn of Wat Bang Nom Kho, and had received a lot of influence from him in the art of amulet making. So when he would make his amulets, he would often make models which resembled and paid reverence to the famous Pra Pim Pra Putta Jao Pratap Sadtw Buddha riding Animals amulets. He made original designs which resembled those of Wat Bang Nom Kho, with differences in design to distinguish them. This caused his amulets to become very popular, as this was the preferred type of amulet at the time in Central Thailand.

His sacred powder amulets were made from a number of different Muan Sarn substance clays, including Puttakun (Yantra Powders), Nuea Din (Earthen Clay), and Pong Nam Man (Oily Herbal Powders). The amulet appreciation society and the aficionados tend to prefer the Pong Nam Man Oily powder models above the other Muan Sarn Sacred Powders, but there is not a very large difference in their price compared to the difference in their rarity.

In the year 2484 BE, Many devotees gathered to officially ask Luang Por Chaeng to make some powerful amulets to protect them during the War. So Luang Por Por Chaeng made a very large release of amulets of different types, with extreme power and effort after many years of preparation. He empowered them for Kong Grapan Chadtri Klaew Klaad and Maha Ud to protect the Thai Buddhist people, in that time of Wars around South East Asia and the whole World. None of the multitudes of amulets blessed in the ceremony were rented out for money, instead, all were handed out for free to the devotees at the ceremony.

The Buddha riding animal amulets of Luang Por Chaeng are used as a second choice for those who do not possess the funds to obtain a Luang Por Parn Wat Bang Nom Kho model, and are said to be equally powerful protective amulets.

Luang Por Chaeng passed away peacefully on 26th July 2500 BE at the age of 72 years old, after 52 years in the ordained Sangha. His body was cremated in the year 2501 BE after being moved to Wat Makut Kasatriyaram. A series of ‘Rian Khaw Hlaam’ four sided Monk coins with the image of Luang Por Chaeng were handed out to the devotees during the cremation ceremony as a sacred memento of Luang Por Chaeng.

His Pra Sivali statuettes have become a classic amulet, and are in ever sense a sacred religious artifact of the pre 2500 BE Era, that can be treasured and revered for generations to come. A truly sacred ancient amulet from one of the most powerful masters of the World War II Era.