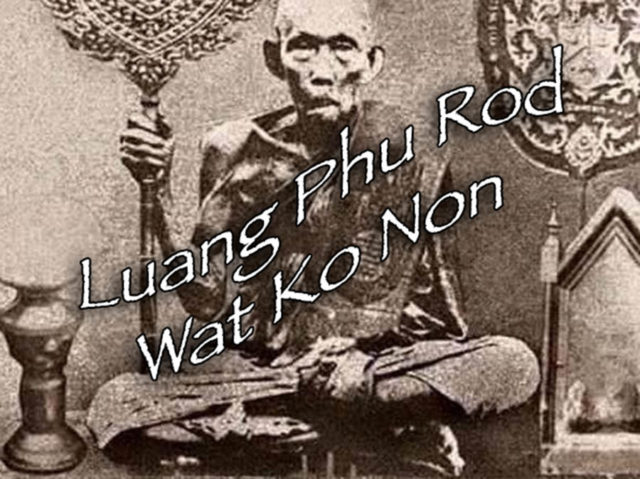 Wat Ko Non is a very famous temple for possessing the Lineage Source of the Wicha and featured in the famous Biographies of two Great Lineage Masters (Mentor and Apprentice), of olden days, namely the Great Luang Phu Rod, and Luang Phu Iam Suwannasaro, the ex abbot of Wat Hnang, in Bang Khun Tien

There is not much documented information about Luang Phu Rod’s life before Ordination, because in Olden days people did not register or keep records of things as much as we do in the present day, but from what evidence has been found, it is thought that Luang Phu Rod was born and grew up as a local of Klong Bang Khwang District, in Tambon Kung Than Municipality, in Amphoe Bang Khun Tian Metropolitan District of Nontaburi. 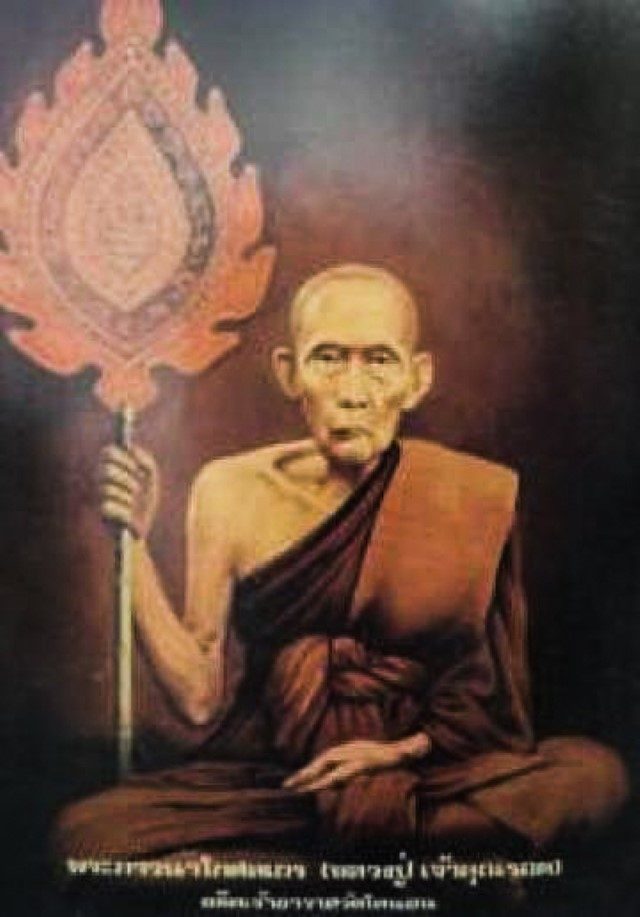 He was the abbot of Wat Nang Non during the time of Pra Bat Somdej Pra Jom Glao Jao Yuu Hua King Rama 4, and was an Adept Practitioner of Vipassana Kammathana who became Abbot of Wat Nang Nong temple, and was given the Royally Decreed Title of ‘Pra Pawanagosol Thera.

During his time as Abbot there, His Majesty King Rama 4 traveled to visit Wat Nang Nong for the Kathina Robe Giving Ceremony, but became offended because Luang Phu Rod did not use the Royal Terminology when speaking with the King, and so his Royal Decree Title was removed, Luang Phu Rod had his Royal Pat Yos fan confiscated and was stripped of Royal status, and moved from Wat Nang Nong to stay at Wat Ko Non. 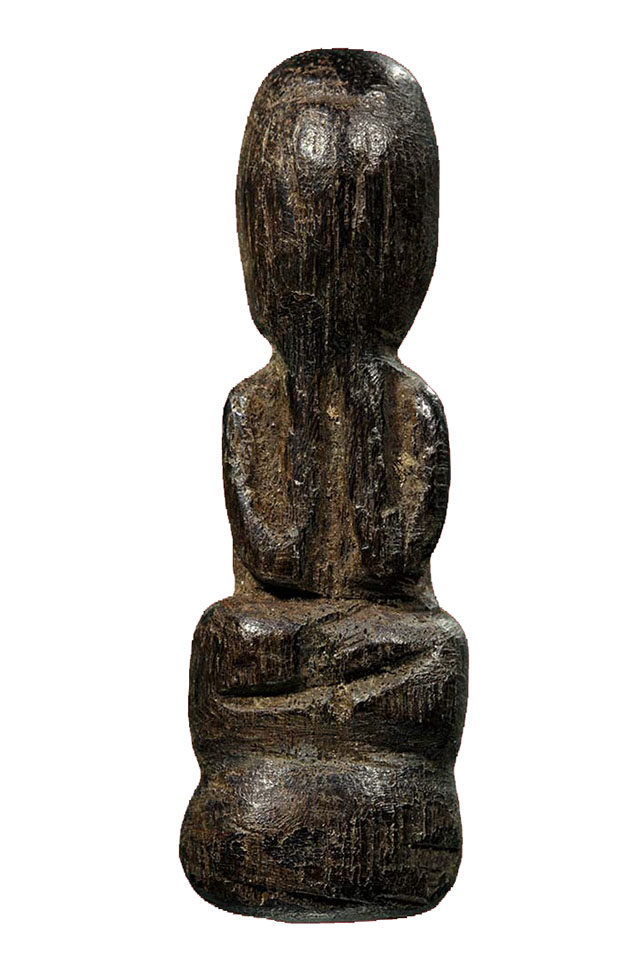 It is believed that the refusal to because Luang Phu Rod refused to use the official terminology of respect towards King Rama 4, because he was angry about the splitting of the Sangha into Dhammayut, and Maha Nikaya sects, which he considered the King to have caused a schism in the Sangha.

Luang Phu was unperturbed by the whole matter, and moved away from the city temple of Wat Nang Nong, to stay in the country temple of Wat Ko Non, which was in the region of his Birthplace, where he remained until the day of his passing, and became the famous Gaeji Ajarn whose Pra Pid Ta amulets. His first apprentice Luang Phu Iam followed him, who was later to become equally famous as Abbot of Wat Hnang, and who would continue the famous Wicha Pra Pid Ta of Luang Phu Rod, and attain equal fame for this Wicha.

The Pra Pid Ta of Luang Phu Rod Wat Ko Non is one of the top ten Pid Ta amulets of all history, for Luang Phu Rod was considered in his time to be one of the Masters with the most powerful Wicha, with so many stories of devotees experiencing miracles with his amulets in circulation that his name became legendary around the whole country

His ability to remove Black Magick Curses was especially renowned. He was a Monk who would spend long periods on Tudong in the Forest, even in the depths of the Jungle which was filled with dangerous elephants, tigers, and other predatory and poisonous beasts, but was Adept with Magical Protective Wicha to be able to survive all of these dangers.

There is a legend of Luang Phu Rod taking a Samanera Novice Monk with him on Tudong Practice in the forest, and they traveled as far as Huay Grabork in Kanjanaburi, where they encountered obstacles. There were only two ways to continue their path through the forest, the first being to climb over high mountains, which were very steep with rocky cliff faces, and very inaccessible, otherwise, before them lay a very wide lake covered in Lotuses. 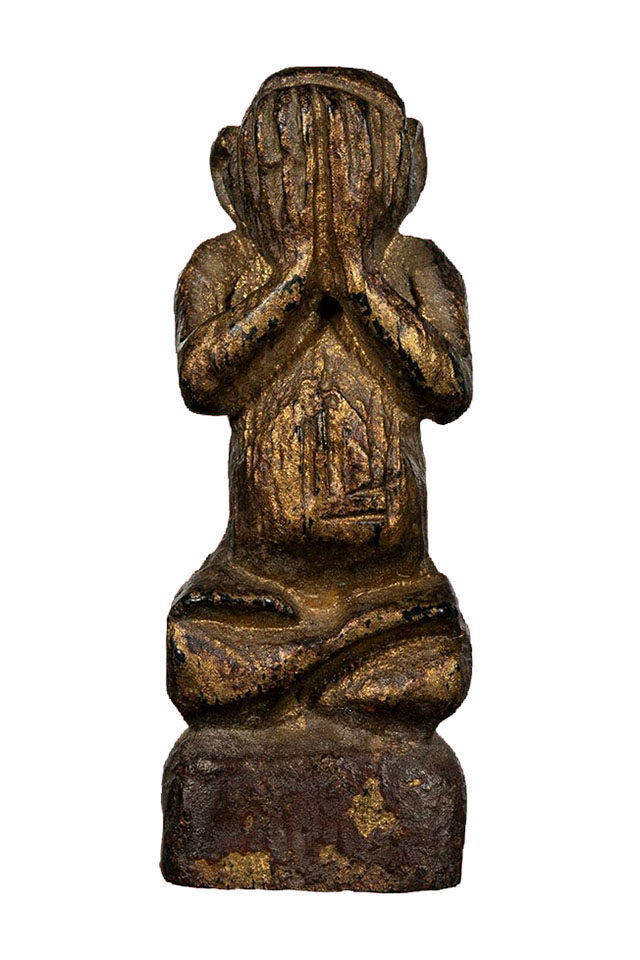 Luang Phu Rod turned around to the Samanera following him, and said ‘shall we cross the marsh together?’ The Samanera answered ‘If Luang Phu crosses successfully, i shall follow’. So Luang Phu Rod sat for a while in Meditation and invoked the Jhanic state of Apo Kasina (Water Elemental), and then slowly crossed the water marsh stepping on the lotus leaves, until he reached the other side.

The Samanera followed him by stepping on exactly the same leaves Luang Phu had stepped on, until he was nearly across, whereupon he changed direction and stepped on a leaf, which Luang Phu had not stepped on, and sank immediately underwater, and had to struggle to the bank of the water marsh. Luang Phu then taught the Samanera the importance of concentration when following, and when practicing, because on single moment of distraction is enough to send everything astray, and is tantamount to carelessness.

There are so many stories in circulation of the many miraculous or magical events related to Luang Phu Rod, his deeds and his amulets, especially the Pra Pid Ta. During the time at Wat Ko Non, both Luang Phu Rod, and his Apprentice Luang Phu Iam (Later to be Abbot of Wat Hnang), made Pra Pid Ta in the same design and fashion, using hand carved wooden images made from sacred treewoods, for distribution to devotees. The amulets brought such powerful results to devotees, that the Pra Pid ta Mai Gae wooden carved amulets of both Luang Phu Rod

Most Pid Ta would have a tiny hole made in the base with a miniature parchment scroll inserted with spells inscribed invoking Pra Sangkajjayana, Pra Sivali, and Pra Pakawambodee Arahants. The base would then be filled with Channarong Stingless Bee Paste, considered a wealth bringing magical substance within the Dtamra Saiyawaet Grimoires.

Mostly the amulets would then be coated with laquer or herbal resins, and sometimes also gold leaf blessing, to increase power, and to protect and seal the amulets from the weather, and make them and their magic long lasting. 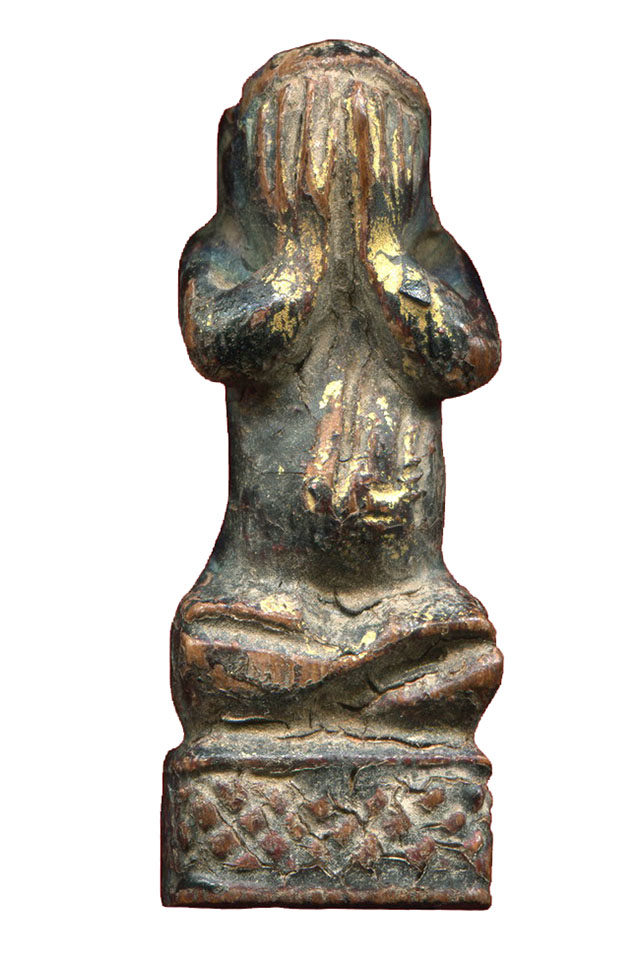 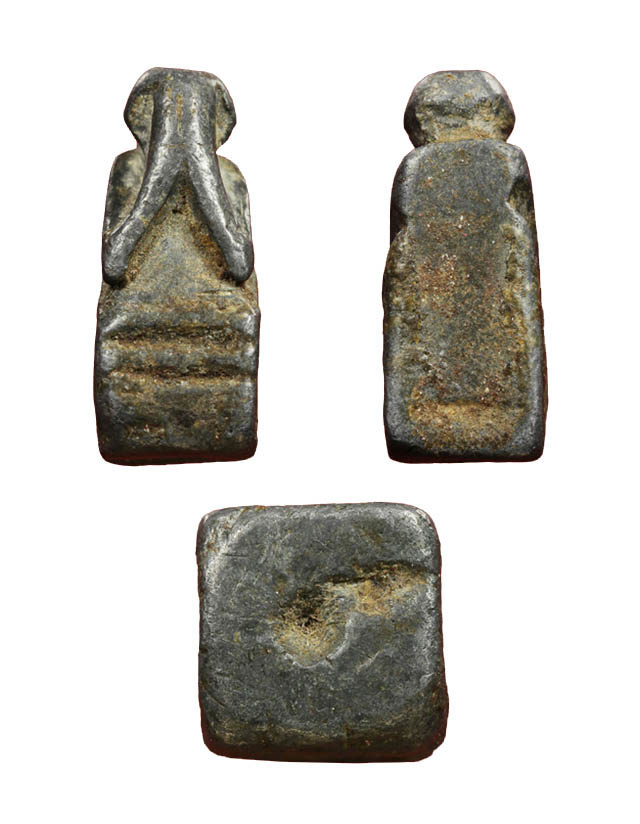 The wooden Pid Ta of Luang Phu Rod were hence made in larger numbers than those of his apprentice Luang Phu Iam. It can be said however, that the amulets of both masters are extremely rare to encounter, and highly prized acquisitions of the serious devotee of authentically powerful amulets, and avid collectors of Pra Niyom Master Class Category Amulets.

Because of the time consumption involved with hand carving wooden minature Buddha images, Luang Phu Rod himself also did not make many amulets during his trajectory, blessing each one as they were carved individually, making the Pra Pid Ta of Luang Phu Rod a true ‘Essential Rarity’ and one of the most highly revered Pra Pid Ta Amulets of All Time, along with those of Wat Tong, Luang Phu Iam, Luang Phu Rod of Wat Bang Nam Won, Pra Pid Ta Rae Bang Phai, and The Pra Pid ta of all the Masters of Wat Sapan Sung (LP Iam, LP Glin, LP Tong Sukh) 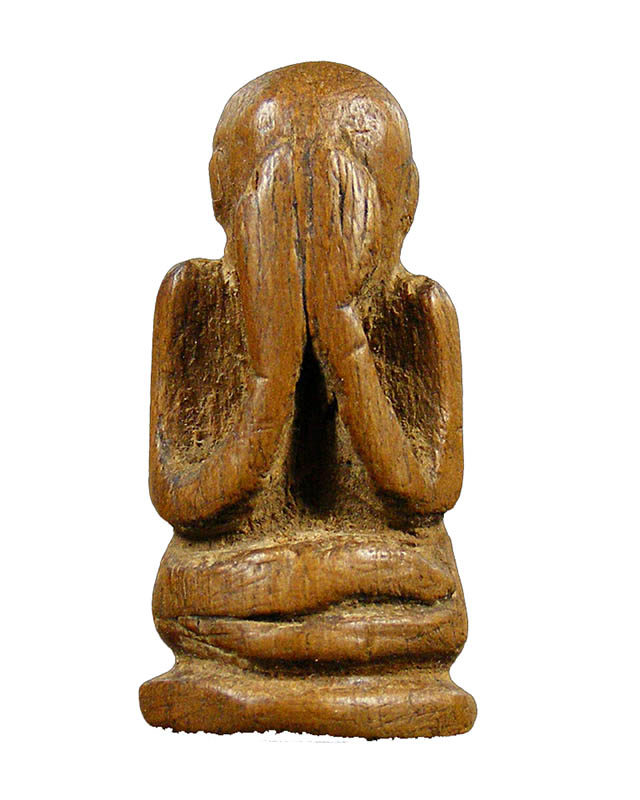