Luang Por Tong Sukh, was a Great Gaeji Ajarn Master Monk of Olden days, and the top Lineage Magic inheritor as first apprentice to Luang Phu Iam, of Wat Sapan Sung. Most famous in the amulet world for his Pra Pid Ta amulets, and powerful Look Om and Takrut Pork Krang Putsa Paste wishing balls and Yantra scroll spells Luang Por Tong Sukh was one of a long lineage of Abbots of the temple of Wat Sapan Sung, who have preserved this ancient and powerful Wicha Pra Pid ta, which was first made world famous by his predecessor and Kroo ba Ajarn; Luang Phu Iam.
Luang Por Tong Sukh Intasaro (Pra Kroo Nantagij Sope), was the abbot of Wat Sapan Sung during the years 2491 BE to 2525 BE, after Luang Phu Glin, and Luang Phu Iam. Much like his predecessors, he continued to preserve and nurture the Wicha Pra Pid Ta already made famous from this Temple by the great Luang Phu Iam, and Luang Phu Glin, and produced his own editions, using the Wicha bestowed upon him from his Kroo Ba Ajarn before him.

Luang Por Tong Sukh was born on the 11th March 2446 BE in the village of Nong Phai Hlueang in Petchburi and was the son of Mr. Kong and Mrs. Pae, and was the youngest of 5 sibliings. At age 11, he went to be educated at the temple of Wat Nong Wa in Petchburi, with Pra Ajarn Joy, Ajarn Say, and Ajarn Nim. When he reached age 13, he left with his uncle to help work to assist his family, and moved to work in Rachaburi.

At age 20, he was called into the military service with the Infantry in Petchburi. After he finished his military service, he applied for a job in the Police force, and was employed as a Police Lieutenant in Petchburi for two years. After this, he was sent to work in the Southern Province of Naratiwat, and later to other Porvinces like Satun, Ban Pong, Rachaburi, Chayapum and Surin.

Luang Por was eventually sent back to work in Petchburi, and after one single year working there, he began to develop immense boredom with the ways of the world, and left the Police force. He ordained into the Sangha in the year 2470 at Wat Na Prohm in Petchburi. Pra Kroo Pit (Abbot) was his Upachaya Ordaining Officer, and Pra Ajarn Phong was his Gammawajajarn Prompt, and Pra Ajarn Up was his Anusawanajarn Witness. He stayed at Wat Nong Wa for one year, and then Pra Ajarn Peng of Wat Sapan Sung who passed by traveling on Tudong, invited him to join him to go stay at Wat Ta Gwian in Pak Kred in Nontaburi. Luang Por Tong Sukh stayed here for three years and then moved on to go study Pariyatti Dhamma at Wat Sapan Sung in the year 2474 BE.

Luang Por Tong Sukh then at this time began to study and practice the Dtamra Saiyawaet Grimoire of Buddha Magic and Occult Sorcery, and the various Kata which were pertinent to the Wicha of the Temple and Masters of Wat Sapan Sung, such as the Inscriptions for Takrut, the methods of making Pong Lob Yantra Powders, the Wicha of making Pra Pid Ta amulets, and Holy Water. He received all of these Wicha and Ritual methods from Luang Phu Glin, then the Abbot and Guardian Sentinel of the Wicha, passed down from Luang Phu Iam.
In the year 2482 BE, Luang Phu Glin passed away, and Luang Por Tong Sukh was given the emergency status of temporary Abbot until 2490 BE, after which he was officially instated by the Sangha Comittee as Abbot with full documentation and Royal decree. He performed his duties and continued the work of Luang Phu Iam and Luang Phu Glin, and was now the new Master and Guardian of the Wicha Pra Pid Ta Wat Sapan Sung, as the third important master of the lineage Wicha. In the year 2508 he was awarded status of Upachaya.

Luang Por Tong Sukh administrated the temple with great prowess, and brought many improvements to the enclave, and saw to the needs of the devotees. His kindness and strength of practice was legendary with the local devotees, for his strict adherence to the Dhamma Vinaya Buddhist Canon, and maintaining his purity as a Buddhist Monk. 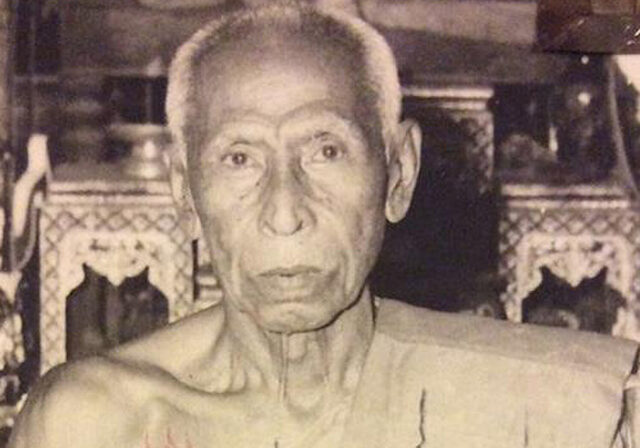 His guidance to the younger Samanera novice monks was excellent, which led to the temple having only well practiced Monks residing, which brought even more reverence from the local community of devotees, for the temple was seen as a true place of practice, with only pure monks residing. Luang Por Tong Sukh guided the fold and took care of the temple and its Bhikkhus with complete self renunciation for many years, serving the congregation, until he passed away on the 7th April 2525 BE at 8:00 am, at the age of 79 Years Old. Luang Por Tong Sukh made the Pra Pid Ta Wat Sapan Sung throughout his trajectory, for devotees would come in throngs every day to seek out amulets, and so one can find Pra Pid Ta of this master coming from a range of time periods, ranging between about 2490 BE, up to his passing in 2525 BE, spanning a period of over 35 Years of amulet making. 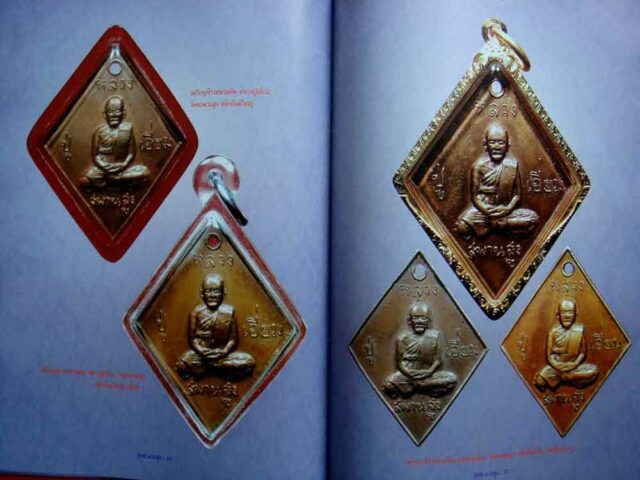 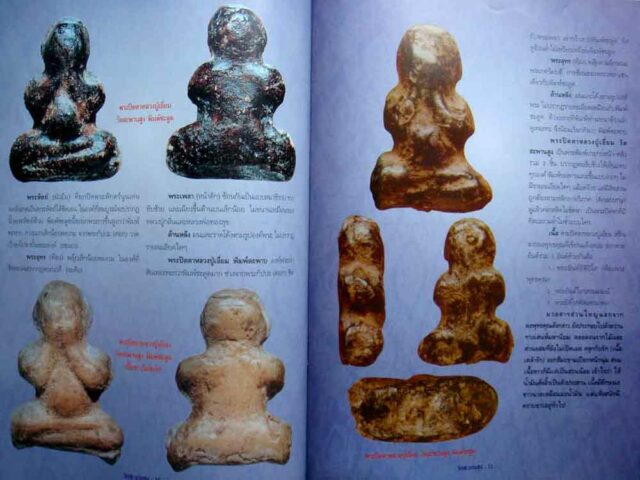 Luang Por Tong Sukh’s amulets are manyfold, ranging from his famous Pra Pid Ta, to Rian Kanajarn Monk Coins, and many talismanic charms such as Takrut, Look Om, and Pha Yant. Amongst his most preferred amulets are of course the Pra Pid Ta, and the Roop Lor Luang Phu Iam, and Roop Lor Luang Phu Glin Loi Ongk Statuettes (released in 2500 BE). Other preferred amulets are the Rian Sema Block Ueam, the Rian Luang Phu Glin, and Rian Khaw Hlam Dtad, as well as various other Rian Sema type coins. Some of his amulets can fetch thousands and even tens of thousands of dollars for rare preferred block presses. 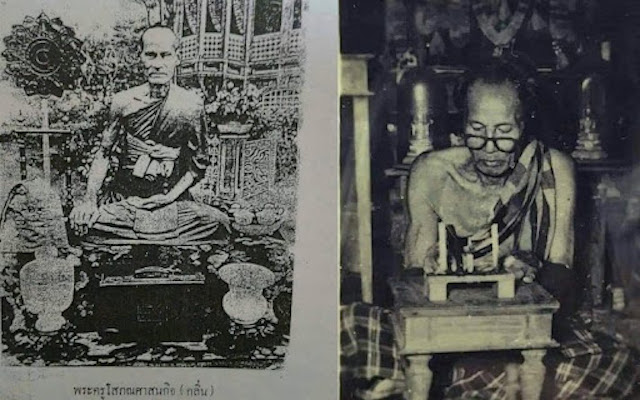 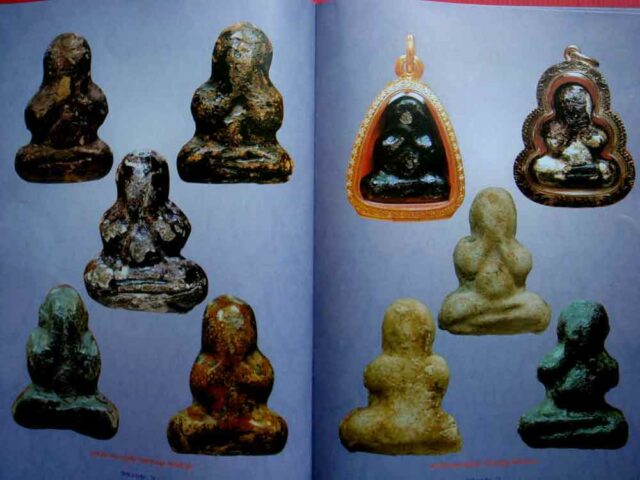 It is said that Luang Por Tong Sukh made amulets from about the year 2490 BE onwards. Both the Pim Chalud and the Pim Tapap models are very highly revered and sought after, with his most preferred and rarest models being the Pim Sader Jun, Sader Bum, and the Pim Sorng Sader (2 belly buttons), and the Pim Tapap (Terrapin Model). 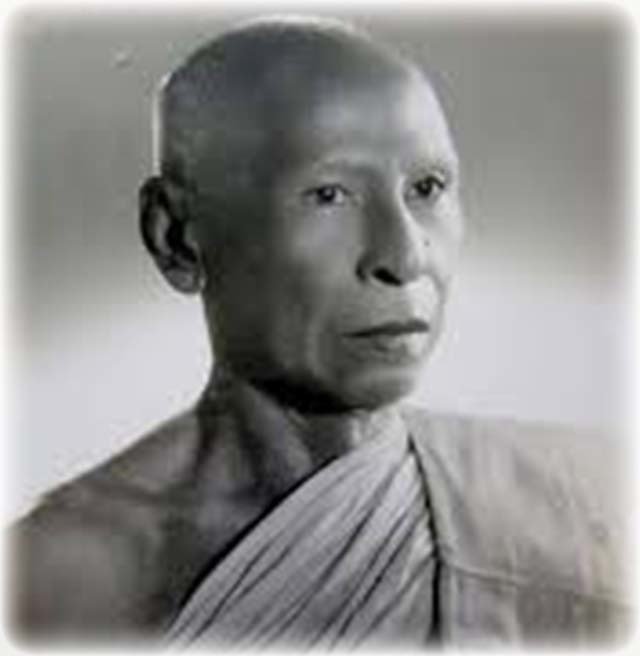 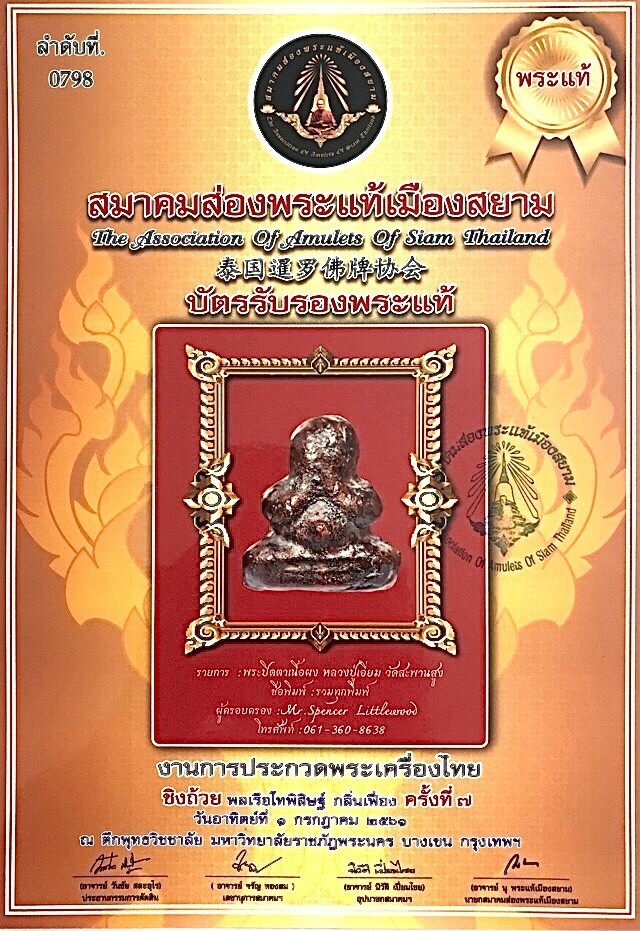 The Pim Sader Jun is very rare, made in the year 2495 BE, and fetches very high prices on the marketplace, starting at about 1000$ and upwards. However, it is a fallicy that the Pim Sader Jun was only pressed in 2495 BE, as Luang Por Tong Sukh kept pressing the Sader Jun amulets with the very same block press until it broke sometime between the years 2510 BE and 2520 BE. The Pim sader Jun and Pim Sorng Sader remain his rarest and most highly valued models, fetching extremely high prices with collectors. The Pra Pid Ta Wat Sapan Sung are highly renowned for their powers of Maha Pokasap Metta Maha Niyom Klaew Klaad Kong Grapan Chadtri, to bring great wealth and protection to the wearer. 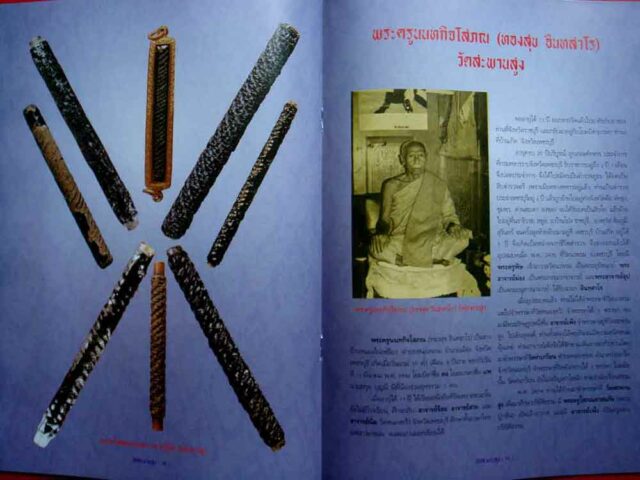 The Pra Pid Ta amulets of all Generations of Masters from Wat Sapan Sung, are among the most highly revered and sought after by Devotees of the Magic of Pra Pid Ta, for its Maha Lap wealth and luck increasing properties, Klaew Klaad, Maha Ud and Kong Grapan Protection Magic, and its Metta Maha Niyom Kaa Khaay spell for good business, as well as powerful protection against Black Magic, and improved meditation. The Pra Pid Ta amulets, were made using Sacred Yantra Powders, and ‘Jum Rak’ lacquer dipped. An eternal favorite of devotees around the world, from Luang Por Tong Sukh of Wat Sapan Sung 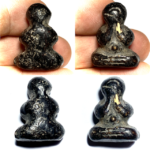 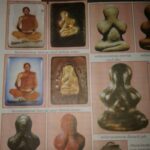 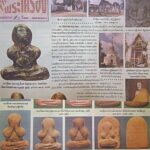 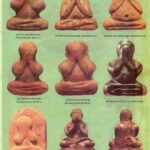 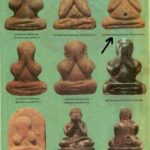 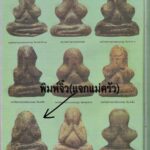 The Pra Pid Ta Wat of Sapan Sung Temple, is a Dtamra (legendary series) that spans over various generations of abbots, all of whom have managed to gain equal fame and high repute for their Pra Pid Ta amulets, all of which preserve the style and methods of the original Wicha made so famous by Luang Phu Iam.
All editions of Pra Pid Ta Wat Sapan Sung are highly sought after. and seen as preferred Master Class category amulets (Pra Niyom), regardless from which Master they came from. 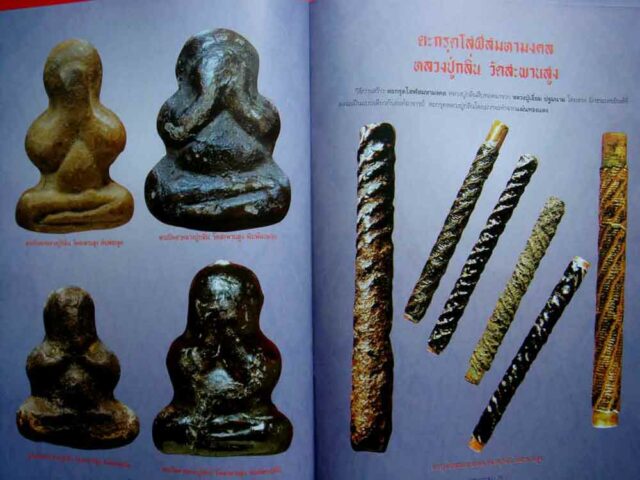 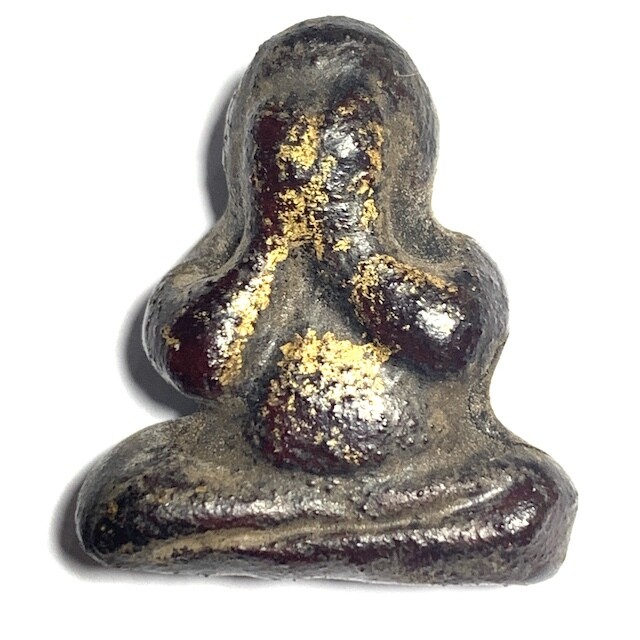 The Pra Pid Ta of Wat Sapan Sung is known in two major Pim (models), namely the Pim Chalud (Blind Man model), and the extremely rare Pim Dtapap (Terrapin model, which is seen much less often than the Pim Chalud). Mostly the amulets would be covered in Lacquer, with some very few exhibits in pure powders. Others can be found to have had the lacquer cleaned off them by devotees in later years. It is known that Luang Phu Glin, one of the Great Masters of the Wicha Pra Pid Ta Wat Sapan Sung, was allergic to Lacquer, and so his versions never had lacqer on them and were pure powders. Luang Por Tong Sukh and Luang Phu Iam however, would more often than not, dip the Pra Pid Ta in lacquer as a protective layer. All masters have followed the more or less the same design and method of lacquering, resulting in the amulets of each master being very similar in design, and mostly can only be differentiated by estimation of the age of the lacquer and Muan Sarn Sacred Powders in order to determine which Generation of Master the amulet came from.