Luang Phor Pring was born on the Lunar Precession of 15 Kam (full moon), on a Sunday the fourth of April, in the year 2412 BE. He was hence born in the Chinese Horoscrope astrological year of the horse. He was ordained as a Samanera Novice Monk at a young age, and was educated at Wat Plab Officially known as Wat Rachasitaram), in Tonburi (then still countryside, but now part of Bangkok). He remained ordained as a Samanera, until he reached age 20, in the year 2432. It was here that he began to study and practice Wicha Akom (Buddha Magic), and became adept, for Wat Plab was indeed always one of the main academies of Magical Arts. Wat Plab is known to have been the place where most of the Great master Monks of Olden days we all know and revere went, to develop and test their skills in psychic empowerment. Masters such as Luang Phu Sukh, Luang Por Ngern, Luang Phu To, Somdej Pra Puttajarn (Dto) Prohmrangsri, and the like, all passed the proving grounds of psychic adepthood at Wat Plab.

It is said that only Great Masters can pass the test of the proving ground of Magic that is Wat Plab, and is part of where the Great Masters obtained their full cotrol of their powers. It was hear by monks close to Luang Por Pring, thaty he secretly learned the Wicha Long Hon (Invisibility spell), and became a Master Adept of Kong Grapan Chadtri Magic, as he was still a young Samanera Novice at Wat Plab. He was then ordained on the 1st March in the year 2432 BE to become a fully-fledged Bhikkhu in the Buddha Sasana, at the temple of Wat Tong Noppakun, in Klong Sarn. After ordination, he received the ‘Chaya’ (Monk’s name), of “Pra Kroo Prasas Sikij Intachodti” and moved to Wat Bang Bakork. After a mere 3 years or so, he was elected to become the Abbot, as at the time there were only a very few monks staying there, and the temple was in need of repair, and advancement, for the temple was in disrepair, and there were many things missing for the necessities of daily life. 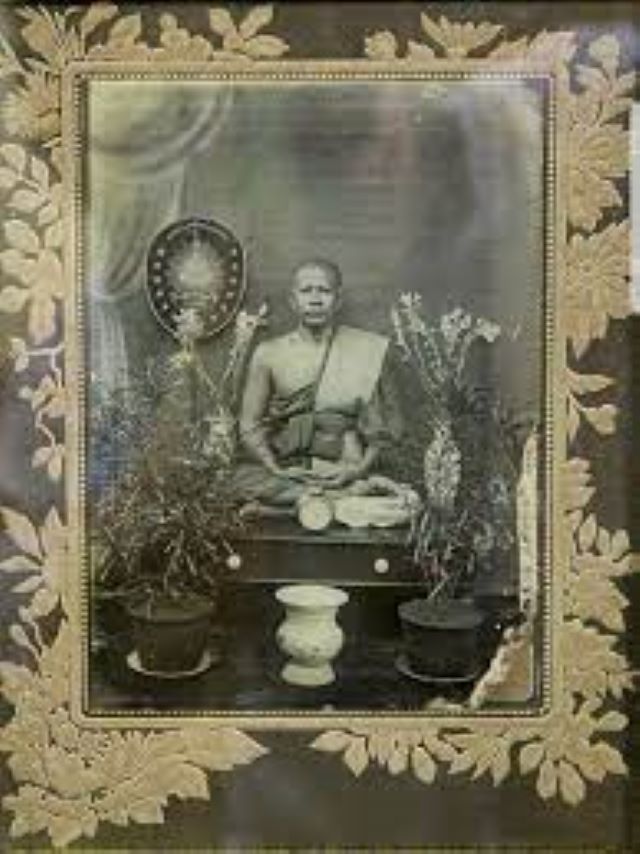 Not all his works of development of Wat Bang Bakork are recorded, but one of the well known atainments he made was his restoration of the Uposatha Shrineroom, Kuti Huts for kore Bhikkhus to come and reside, and the many fracilitieds necessary such as refectory, prayer hall, meditation hall, temple bell, Chedi Stupa, and the like. In the year 2479 BE, Luang Por Pring was elevated in status and given the Chaya name of ‘Pra Kroo Pra Sasana Sikij, for many of his devotees were Royal Courtiers, and he had a National Following of Devotees, that resounded around the country, for his great deeds and powerful magic. Members of Royal family and their Courtiers would often come to stay and keep precepts and practice meditation under Luang Por Pring. It is not documented as to the year of his passing, as far as our investigations have led to date. 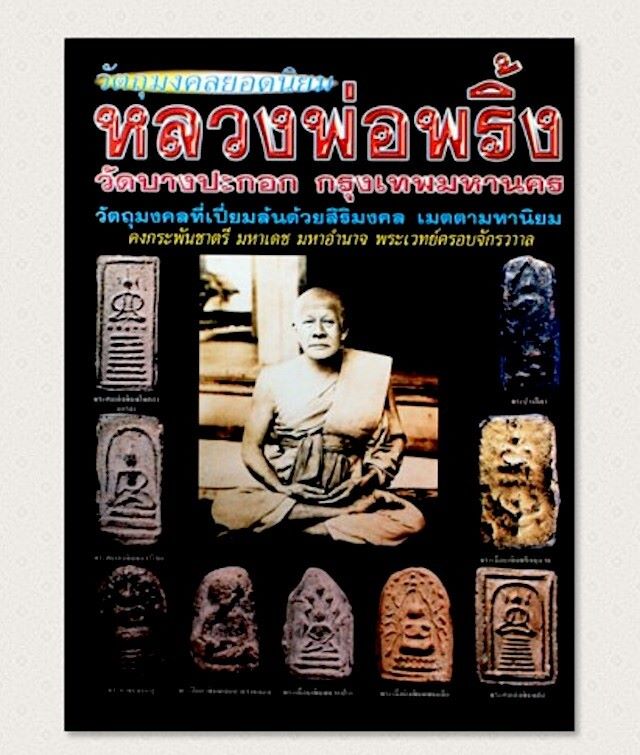 Luang Por Pring was known both for his diligent practice and prowess in the Buddha-Dhamma Vinaya, as well as for ppossessing and developing many Magical Wicha, and methods of empowering different amulets, and the mastery of making powerful Muan Sarn Sacred Powders, and psychic empowerment Luang Por Pring Intachodto, was well known to be a ‘Mor Ya’ Traditional Medicine annd Spiritual healing Master. He also had the honor of being Declared a Powerful Adept, by the great Master Monk Luang Phu Sukh, of Wat Pak Klong Makham Tao, and of receiving Kammathāna secrets from the Great Luang Por Parn, of Wat Bang Nom Kho. Luang Por Pring, was a Master Geji Ajarn, who apart from receiving spiritual secrets from LP Parn, also carries the eminent status of being the Kroo Ba Ajarn in the Wicha Look Om, to the Great Luang Por Parn of Wat Bang Nom Kho. This is of course why there are some similarities in some of the Look Om of LP Parn and LP Pring, such as the pinkish Look Om Chompoo. 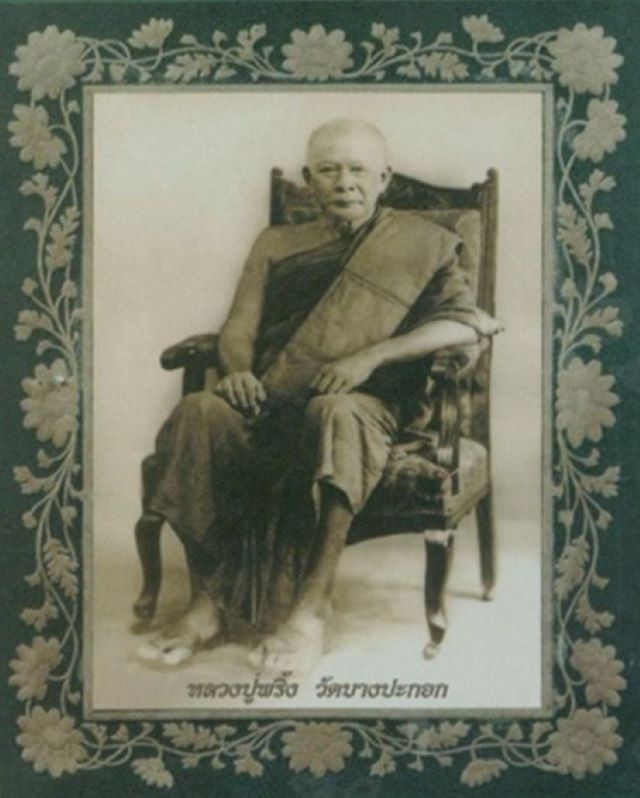 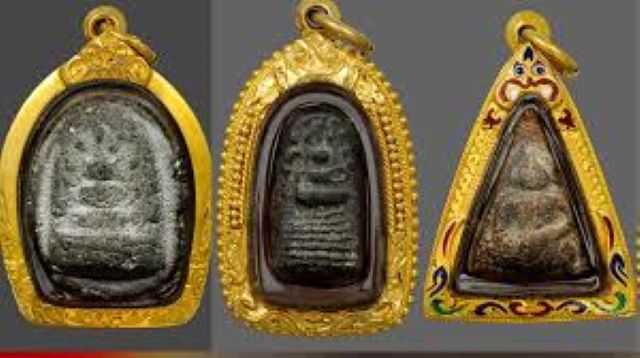 Luang Por Pring made many highly preferred amulets in many froms, ranging from Pra Somdej, Look Om, Buddha Images of various postures and styles,Takrut, and Look Om. LP Pring was famous for his Look Om Maha Gan, and Look Om See Chompoo sacred wishing balls, and many other Muan Sarn Sacred Powders amulets. Of course his most prized amulets with his top devotees are his Monk Coins, for the obvious connection with the Guru, through his image. But it is perhaps his Look Om which are the most seen and talked about, perhaps because of the fact that many of his other amulets, are now very rare to find in the present day, and less people in general know of their existence, apart from the high-end collectors and devout followers of Luang Por Pring. 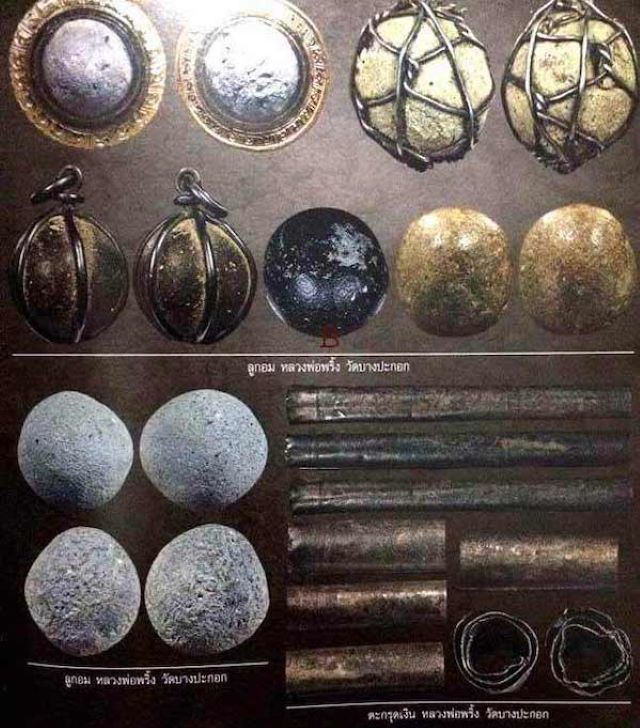 The Look Om Luang Por Pring was made mostly in both Gray and Brownish colored Sacred powders, and is an extremely rare and powerful amulet, most highly sought after by devotees of this Genre. In addition, a very small number of Black color, and some of these white colored Look Om are also found in existence, as well as some very rare pink colored models, both of which are most highly preferred of all from this Master along with his grayish ‘Nuea Pong Pasom Toop versions.

It is assumed that the Wicha he received from making Pra Somdej according to the formula of Somdej Dto, may have influenced this particular mixture of Muan Sarn Sacred Powders used for his Pong Puttakun white versions, which indeed have many aspects which resemble the sacred clay of Pra Somdej Wat Rakang including Pong Bpathamang, Pong Puttakun, Pong Trinisinghae, Pong Ittijae, and Pong Maharach. It is not every day that one can be lucky enough to encounter a sacred amulet of Luang Por Pring, a Classic Master-Class Kong Grapan Chadtri Klaew Klaad amulet, from a Master Geji Ajarn who carries the status of Kroo Ba Ajarn in Wicha, to the Great Luang Por Parn, of Wat Bang Nom Kho. Powerful Protection from a Niyom Category amulet, of Master-Class Status, of the Great Luang Por Pring.

During the Indojin (Indo-China Wartime) 3rd largest blessing ceremony of amulets in the History of Thai Buddhism at Wat Sutat, LP Pring was invited with a host of other master monks, to bless the world famous Pra Kring amulet, of the great Pra Sangkarach (Pae).

All the Bhikkhus who attended the empowerment ritual, inscribed Magical Khom Agkhara Spells onto Sacred Yantra Foils. These sacred plates were smelted and poured into the molds. When Luang Phor Pring’s Yantra Foil spells were placed inside the smelting furnace to be smelted intosacred ingots along with the other Yantra Foils from other Masters, it is told that it was not possible to get them to melt at that heat. This astonished those who witnessed this, and so Luang Por Pring was asked to assist in helping them to melt. Luang Por Pring performed some special incantations, and cast some spells over the sacred furnace, and slowly but surely, the Yantra Foils began to melt and mix with the other Sacred chanuan metals.

Luang Por Pring’s protective magic was famous since around the 2nd World War and Indo-China Wartimes, when a Japanese Base was built nearby to the temple of Wat Bang Bakork. It was believed that lp Pring has made a protective Kata and Magical Shield around the area to protect the temple and the local inhabitants around it. So at that time, many people moved to live in the surrounding area, in the belief that they would be safe from the bombing which was being performed by the Western Forces during that time of Japanese Occupation in Thailand. Another story of his legendary magical powers, was the fact that the Great Magician and Looksit of Luang Phu Sukh, and Royal Prince, Admiral Grom Luang Chumporn Udomsak, sought out lpo Pring to beseech magical Wicha from him and his tutelage.

The legend tells, that LP Pring initiated him fully,and as a gift of Initiation, presented Grom Luang Chumporn with a Ban Neng (forehead of the skull), imbued with the spirit of the Mae Nak Pra Khanong Hoeng Prai Deva Spirit. The very same Mae Nak Pra Khanong which you can see in a shrine at Pra Khanong in Bangkok, on the Sukhumvit Road to this very day.

This is the very same spirit, who was so famously untamable, due to her anger at her unforeseen early death, and great desire to remain with her still living husband, that was bothering many people in the area. When Grom Luang Chumporn took the Ban Neng to the Palace, and various relatives within the Royal Palace witnessed seeing the ghost. It is said that the great Somdej Pra Puttajarn (Dto) Prohmrangsri performed a ritual to subdue the spirit once and for all, by inscribing the forehead bone and inserting a spell to ‘sakot’ (bind) the spirit once and for all.

It is recorded in the diary of Pra Maha Saeni Wongs Na Ayuttaya, who authored the official documentational biography of Somdej Pra Puttajarn (Dto) Prohmrangsri, that, after the passing of Somdej Dto, the Ban Neng Forehead Bone of the Mae Pra Khanong Hoeng Prai Ghost, was handed down to Somdej Pra Puttajarn Tut, who in turn, gave the Ban Neng to Luang Por Pring. Luang Por Pring then, as already told, passed the Ban Neng on to Grom Luang Chumporn. Luang Or Pring remains one of the top Masters of Yesteryear and one of the most highly revered for his powerful Look Om amulets. To this very day, devotees still flock to the temple, to pay devotion and respect and pray for blessings from Luang Por Pring in his mausoleum, so long after his passing.